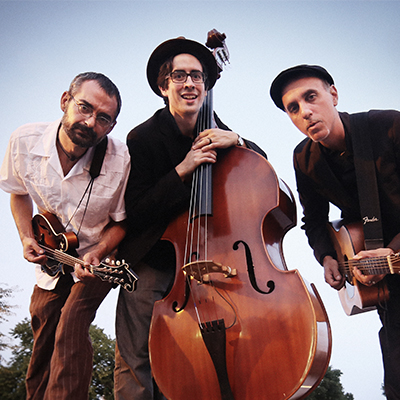 Criss-crossing the country for the past five years from the East Coast to the Rockies, this acoustic trio uses mandolin, guitar, upright bass, and vocal harmonies to captivate audiences with their crafty songwriting, fiery improvisation, and soulful delivery. The band's versatility spans the range from rootsy folk to gypsy swing to bluegrass and blues, and makes them equally at home whether performing in an intimate club or on a large festival stage.

The Vine Brothers were awarded Americana Group of the Year in 2016 by The International Music and Entertainment Association’s 4th Annual IMEA Awards. Their third album No Candy was nominated for Americana Album of the Year , and the song "The Well" received a nomination for Americana Song of the Year. The song “East of Albuquerque” was chosen as a finalist in the 2016 International Songwriting Competition (ISC).The band's first two albums, 2012's Low Rent and 2013’s The Devil and the Deep Black Sky received considerable airplay on over 100 stations in the US and Canada and charted in six cities. One of the songs from Low Rent, "Three Bottles," was featured on the Discovery Channel show Vegas Rat Rods. "One of the best and most innovative bluegrass-Americana bands in the U.S.